You should have been there.

The combination of a winter cold and the prospect of black ice (see Frosty Hollows) has meant that I haven't been getting out on my bike quite as much as usual and so it was a pleasure to go out for a couple of hours on Sunday, get my heart and lungs working and enjoy the
local scenery.

For the last couple of years as well as going out on my own I've also gone out with one of the local cycle clubs. Some of the club's members are into the competitive stuff like time trials. A good proportion log the speed and distance of every ride. I just join in with the social rides and, if I want to know how far we've gone, simply ask someone else. The trick to going a long way, in a companionable fashion, is to go at talking pace; though I do tend to talk even when we're going up some of the more severe hills and replies are often a little breathless with more than a hint of "shut up". But, the one thing we share, apart from having fun riding bikes,  is a love of the ever changing local countryside. A month ago, on an early morning Wednesday ride, it was the quality of the light and the low hanging cloud that hugged the edges of the hills as we came down through Langdale End. On Sunday, it was the shape of the underlying landscape as revealed through winter trees shorn of their foliage.

I've always been mildly short sighted but, as long as I could still read a number plate at regulation distance, I din't always wear my glasses. These days I wear them nearly all the time. I choose frames that are wider than they are deep. This  means that I can do short distance work, like reading a map, by simply looking underneath them. It also means that my clear view of the distance is framed by the glasses and as I'm riding along I often find myself thinking what a nice picture this would make. But I know that if you try to capture it on film (nowadays, temporarily burn into the pixels of a Charge Coupled Device) it's very hard to capture the full effect. This is particularly true when you're looking at an extended landscape rather than a close detail.

In the past week I've read a lot of tributes to the late John Berger. One of the things he was said to have said, and I paraphrase, is that he no longer made many attempts to photograph the world around him because it distracted from the act of looking. Imagine a 3D immersible environment in which your every movement changes the perspective and no matter how close you look there's always more detail to be see. I know let's call it reality.

So, rather than attempt to frame the world into a photograph that never quite manages to create the feeling you get when you're actually there, just get out, move around, and look. 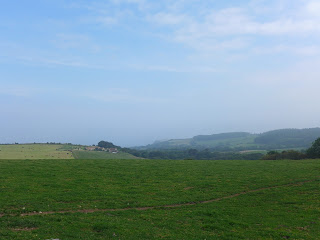 Here's one I took earlier from a spot passed on Sunday