The value of public space

The places we share have enormous value. Parks, squares, gardens, cemeteries, little scraps of "waste" ground, they're the places we socialise, make contact with nature, develop ourselves through play, keep ourselves fit and, perhaps above all, they're places where we can all meet as equals, regardless of wealth or status.

Of course, some people see the uses that we make of public space as a wasted opportunity to make money. They'd prefer us to pay to enter their theme park or pay the subscription to the golf club. And of course, because of their essentially democratic nature, they're places that many of the most powerful in our societies actively avoid.

I've been involved in attempts to improve the quality of public space in my own area for many years and have some experience of what's needed to succeed or, more often, what isn't enough to succeed. Of course, lessons drawn here, a modest seaside town in the north of England (Scarborough), may not work everywhere, but a lot of them concern basic human nature and the relationships between people and their civic authorities. I suspect that these things are similar wherever we happen to be..


Firstly, and perhaps obviously, people's relationship to public space depends a) on their proximity to it and b) whether, and how often, they make use of it. For example, I'm keen to improve a stretch of old railway as a route for walkers and cyclists but most of the local politicians and public officials don't use this space very often because they tend to drive rather than walk. This means that they're only indirectly aware of the problems that need to be addressed and because they don't impact directly upon their quality of life, or on that of most of the social groups with which they identify, they tend to remain at the bottom of the political agenda.

In our town, a number of Friends Groups have been established which work with the local authority to improve their particular bit of space. The groups which work well are those for spaces that are close to where people live and are geographically limited. I know from my experience with the old railway that while many people will identify with short stretches, not many will do so with all 22 miles. Our strategy to deal with this was to form spin off Friends groups for distinct spaces along the route and to split our responsibilities for the line as a whole with a sister group based at the other end of the line in Whitby.


A sense of ownership

It's often said that the key to getting people involved in the management and maintenance of public space is to give them a sense of ownership. But ownership implies control, maybe not total, but control nonetheless. So, if a civic authority carries out a consultation exercise but only appears to listen when the people want what they want, then the process breaks down. Getting genuine public participation requires a genuine sense of partnership; where those in power genuinely listen to those without and are seen to try to find ways to put what the public want into practice rather than just falling back on their superior knowledge and telling them why it can't.

It's not always obvious who might  feel that they own a space. For example, there's a stretch of the old railway that was once a set of carriage sidings (where carriages from excursion trains that had brought workers for a day out to the town would be left until it was time to go home). Because it was a rail yard, the houses on each side had their backs to it. This means that no one directly overlooks it and neither of the communities on either side has fully taken it as their own. The boundary between local administrative divisions also runs along the line which means that none of the councillors fully claims the space as their own either. 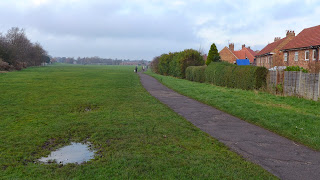 Whilst there are undoubtedly roles that can be played by volunteers, including strategic roles about the direction of development and the detail of design as well as manual tasks such as litter picking and tree planting, this cannot be done without consistent support from the civic authorities. We can suggest where work needs to be done, and get in touch with people that are prepared to do it, but we can't always be expected to supply the relevant tools, equipment and materials and, on publicly owned land, there are lots of things we can't just go ahead and do without the landowner's express permission. Volunteers can assist civic authorities but cannot entirely replace them.

At the tail end of the last century, Scarborough received central Government funding to build two Park and Ride car parks. Connected by bus services into the town, their aim was to reduce congestion in the town centre. In order to show that this was part of a bigger traffic reduction scheme the Council was obliged to set up a Cycle Forum to explore the best ways to get more people on bikes. There were about 50 of us at the initial meetings, and we happily pored over maps and drew up plans. Only a very few of these ever came to fruition and, once the Park and Ride scheme had been built, the Cycle Forum quietly had its support withdrawn. As far as the civic authority was concerned it was job done. There'd never really been any real commitment to developing and implementing a Cycle Strategy and the people who'd been engaged in the process inevitably became disillusioned and distrustful.

The first meetings of any organisation set up to harness public engagement tend to be well attended. Organisations get established, people agree to take on the roles of Chair, Secretary and Treasurer, and the work of developing plans and, with a fair wind, putting them into practice can begin. Attendance at meetings then inevitably falls. My hypothesis is that many of those who've attended at the start want something to happen but don't want the direct responsibility of making it happen. By their initial attendance they validate the decisions and actions of those that do. However, as time passes, people's lives change and those who were originally prepared to take on responsibility may no longer be able to do so. At this stage the organisation runs the risk of collapse through lack of continuity. But there is always one partner that will be there, the civic authority. If they provide suitable administrative support, then an organisation can be resuscitated with it's aims, plans and objectives intact and survive any potential collapse.

I'm one of those annoying people who, when asked "Why don't they do this or that?", will come out with a list of reasons why they don't (having first identified who this mysterious they are) I know that asking the question is really just a way of saying "I think so and so ought to happen" and, rather than use this list of reasons as an excuse for not doing anything, civic authorities, and their partners, need to be able to acknowledge difficulties as difficulties to be overcome and not insurmountable barriers.

There's plenty of research out there linking access to good quality public spaces with not only the physical and mental health of individuals but also of the community at large. (I could provide links but just search on any of these associations and you'll find plenty for yourself). People will engage with public space if it's close to them and they use it. But to do anything really worthwhile needs the active commitment of the civic authorities. Anyone who's attempted to make things change knows that there are many obstacles in the way. The challenge, in particular for civic authorities, is to help to find a way around these obstacles rather than simply point them out as a reason why things can't be done.