Wandering along the Cinder Track yesterday I couldn't help but notice how many empty bottles and cans hadn't made it to the bin. Of course, it's possible to wish that people didn't drop litter but the politics of wishful thinking has always been a hopeless enterprise (if only the people with guns would stop pulling the triggers....) and so later in the day, when the weather had improved and I'd been inspired by an item on the Food Programme (Radio 4) about an activist in Los Angeles who'd challenged the authorities by growing food in the little strip of land between the sidewalk outside his house and the roadway, I decided to nip out for the time it would take the bread I'd been making to bake and, armed with a bin bag, a pair of stout gloves and a litter picker, recover the bottles and cans so that they could be recycled. Half and hour later I was back home with a full bag and the bread was done. 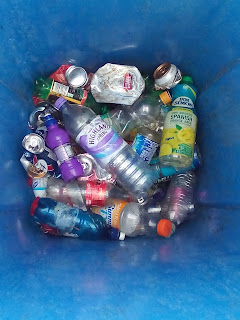 Recovered cans and bottles in my blue bin

Whenever I'm out doing this kind of feel good public service a passer by always seems to say "it's an endless task, isn't it?" and indeed it is. Not only do the forces of entropy mean that any ordered state requires a constant input of energy to keep it that way but also, in common with many domestic tasks, there are usually more people prepared to create a mess than there are to clear it up. Indeed, since there are many more ways to create a messy environment than a tidy one (in a tidy one there's only one way in which the bottles and cans aren't there but in a messy one there are literally* countless ways to arrange them) it's much easier to be successfully messy than successfully tidy.

But, you might ask, apart from this idle philosophical coupling of litter and entropy, what's the point of this post and why's it got this title? Well, to put it simply I'm having a dig, a metaphorical dig. A few years back some local election candidates for the Green Party put a picture on the back of their election leaflet showing them doing exactly what I'd been doing, picking up litter. Now I'm sure that they both like to consider themselves as something other than your standard attention seeking politicians but what got my goat at the time was the headline that went with it "Job Done".

* I pondered whether to say literally or not here but, considering all the possible ways in which the cans and bottles could be arranged and swapped about I reckon that you wouldn't actually ever have time to count them all so literally countless it is.