A friend has just had his 64th birthday and it'll be mine later this year. Because he lives in Southampton I doubt he'll be renting a cottage on the Isle of Wight and if he ever does stay out till quarter to four there'll be  a search party long before anyone locks the door.

In the early 1980's I spent a year living in the United States and I didn't know anyone that I knew had a gun. Of course this doesn't mean that none of my American friends did, just that they didn't choose to talk about it.

A decade later we took our young family on a camping trip to the North West coast and spent a few nights camped half way up Mount Spokane in Washington State. Along with the marvelous views and an entertaining troupe of gophers we shared our campsite with, among others, a couple of old hippies in a camper van.

Now one of the things about life under canvas is that you get to hear everything that's going on around you. The sound of rain, on a well pitched tent with a decent flysheet, is actually quite comforting but an unwanted trample through the Beatles back catalogue at half past three in the morning isn't.

Not being particularly sensible, and by then sleep deprived and bad tempered, I crawled out of the tent, went over to the hippies camper van and politely asked them in that passive aggressive English way if they'd mind turning the music down. "I've got small children and we'd really like to sleep"

It worked, the music stopped, I calmed down and dropped off.

The next day I overheard the hippies discussing the incident with another camper. The final words were "and he had a gun.." 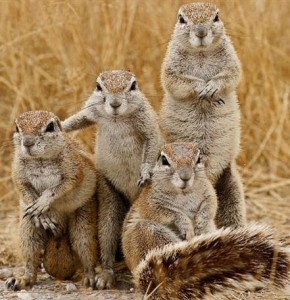