Man in a suit

A couple of weeks ago I went to a college re-union.

For many years I never quite felt comfortable going back. Not so much all the mellowed old Cotswold stone more the sense of being surrounded by young folk who thought they owned the place; for the very good reason that they probably did. A bit like a favourite episode of Top Cat where Brain is accused of having an acute inferiority complex on account of his acute inferiority.

This feeling has eased in recent years. Partly because I became reacquainted with the City by helping out in a friend's bike shop (see Football in Space) and partly because I now know that the swaggering sense of self confidence simply won't last.  Even Tony Blair and David Cameron might grow up one day.

Our college was known for its political activism and, in the absence of a proper central students union (not to be confused with the private debating society known as The Oxford Union and which we pointedly boycotted), most of the University's conscientious rebels seemed to hang out in our junior common room (JCR) This meant that the traditional student activities of dressing up, abusing oiks and being manly in boats were things that we actively avoided. Instead we were putting grandiose motions to the JCR (giving our ever so important opinions on world affairs), organising demonstrations, producing pamphlets and, above all, getting stoned and having very serious conversations. I survived, and did what work needed to be done, by using the simple tactic of getting up in the morning.

What this all means is that the invitation to go to a rather traditional re-union, one where you get dressed up in the play wear of the ruling elite, was never likely to be particularly appealing. Never the less, an old friend who's still based in Oxford encouraged me to go and eventually, despite the Black Tie preferred bit of the invitation, decided "what the heck.."

But, whilst I'd been fully intending to simply put on the tidiest and least grubby things I could find in my wardrobe (i.e using the "preferred" opt out clause), my mother got wind of my trip and couldn't but help mention it to one of her neighbours who quite correctly guessed that I'd be unlikely to have the right gear, and also equally unlikely to hire it, but offered to loan me her husband's.

So, on a trip over to see my parents, both in their eighties but still sprightly in mind if not so much in body, I felt obliged to try on the offered suit and blow me if it wasn't a perfect fit. 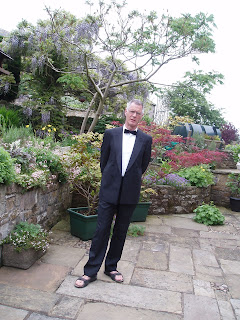 Man in a suit

Those of you who are concerned that I might have completely abandoned my rebellious streak will be disappointed to know that, rather than the preferred summer wear of sandals, I borrowed back the one pair of black shoes in the house from my son and was therefore properly dressed from head to toe.

In anticipation of the occasion I'd imagined conversations in which success and status were on prominent display but,  to my surprise, that didn't happen at all. Perhaps if I'd gone to a similar event a decade ago it would have been different. As it was, I spoke to people that I'd probably never spoken to at any length before and discovered that, by and large, the prominent motivation of everyone there, no matter what prominent positions they might now occupy, was to try to do the right thing. Of course, it may well be that the truly ambitious had more important things to do than hang around in Oxford talking to people who were probably of no further use to them. We'll never know.

Postscript 1: Before going to the event I popped into Walton Street Cycles and, for those who know the tale, can report that business seemed to be going well and that they'd just got the maintenance contract for Oxford's soon to be launched public bike scheme. Meanwhile the despicable neighbouring venture is going broke and is up for sale.

Postscript 2: The day after I went for a bike ride and pub lunch with another old friend who's a serious academic at the Institute for Environmental Change. I was delighted to be able to reaffirm, at least to my own satisfaction, that I'm not a complete bullshitter.